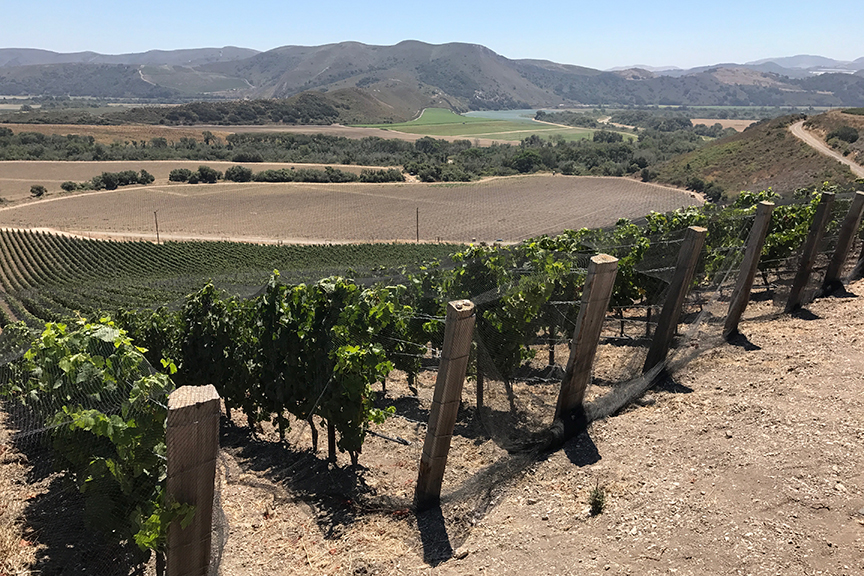 Above: Domaine de la Côte’s top vineyard in Santa Barbara County, “la Côte” (the slope). A visit to their vineyards is a glimpse into why the Santa Ynez AVA is one of California’s most compelling.

Domaine de la Côte organically farms 65 acres on the westernmost edge of the Santa Ynez AVA in Santa Barbara County, a stone’s throw from the Pacific and just three miles from its winemaking facility in Lompoc. Its vines thrive at up to 700 feet in elevation in what is considered to be the coolest sub-zone in the appellation, with nearly constant ventilation arriving from the nearby coastline. Its vineyard known as “la Côte” (the slope) rises up steeply from the river valley floor facing southeast: The combination of maritime influence, altitude, and the subsoils made up of ancient seabed is ideal for raising the lean, mineral-driven style of Pinot Noir that the winery has come to be known for.

Roughly 72,000 bottles were produced from the winery’s 2014 vintage, its current release. Three bottlings of Pinot Noir are available from the harvest: Memorious, Bloomsfield, and La Côte. The panel tasted and all three and was particularly impressed by La Côte 2014 (GREAT WINE), the estate flagship. Where the other bottlings from the current-release vintage have the same remarkable vibrancy of fruit flavors, La Côte has a slightly richer vein of minerality and a wonderful hint of eastern spice that makes it stand apart from its equally delicious siblings.