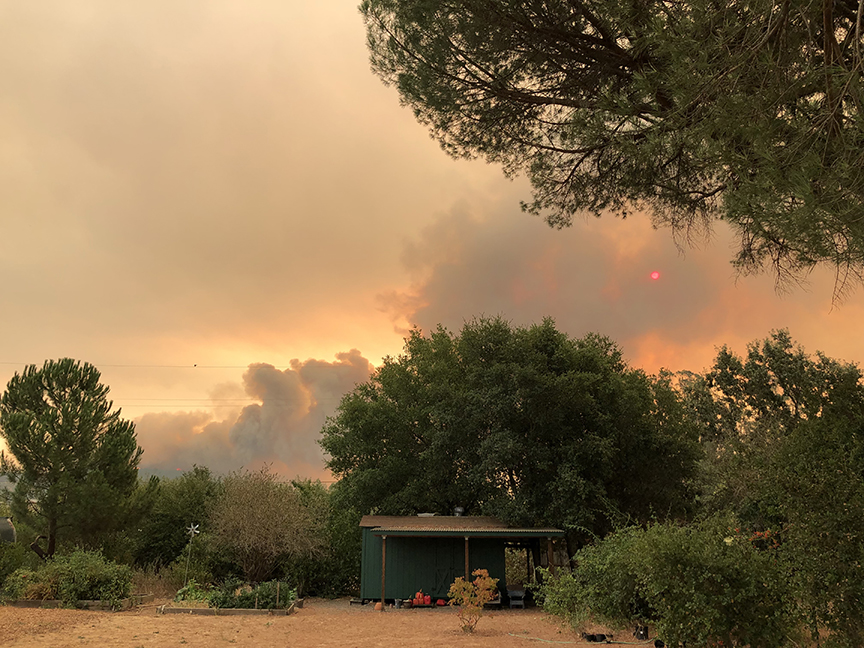 The North Coast of California was hit last night by a rash of wildfires. Most of the fires were sparked by gusting winds taking down trees hitting above-ground power lines. Fires spread quickly with one of the largest, the Tubbs Fire in Santa Rosa, spreading to over 25,000 acres in a matter of hours. The Tubbs Fire has burned portions of the northern part of the city of Santa Rosa and forced the evacuation of two area hospitals and thousands of people.

In Napa Valley, one of the first fires last night started around 10:30 pm on Atlas Peak quickly spreading as far as the Silverado Trail and forcing evacuations throughout the Atlas Peak area of the mountains and down to the valley floor between Oakville and Yountville. Numerous iconic wineries and vineyards along the Silverado Trail are still threatened by the fire and thousands of people are unable to return home.

Smoke from the fires has filled the skies as far south as Santa Cruz and obscured vision throughout San Francisco and the East Bay. Bay area residents are being advised to keep windows closed, stay inside when possible, and drink plenty of water to help deal with smoke inhalation.

My own home east of the town of Sonoma sits near the edge of one of the fires in the Carneros area. Evacuations less than a mile from our house kept us up last night with the bags and emergency pet supplies ready in case we had to leave. It was difficult to know which way would be the right way out though as fires are still burning north, east, and south of us. My daughter’s friends have been evacuated from throughout the area and schools in both Napa and Sonoma counties are closed today. Numerous friends and winery colleagues of mine have been evacuated from both Napa and Sonoma as well.

If you live in the area, evacuation centers can use volunteers. However, stay off backroads unless you are evacuating to keep them open for fire crews.

Here is a photo taken this morning from my house looking east. The ridge-line visible from our house is on fire.