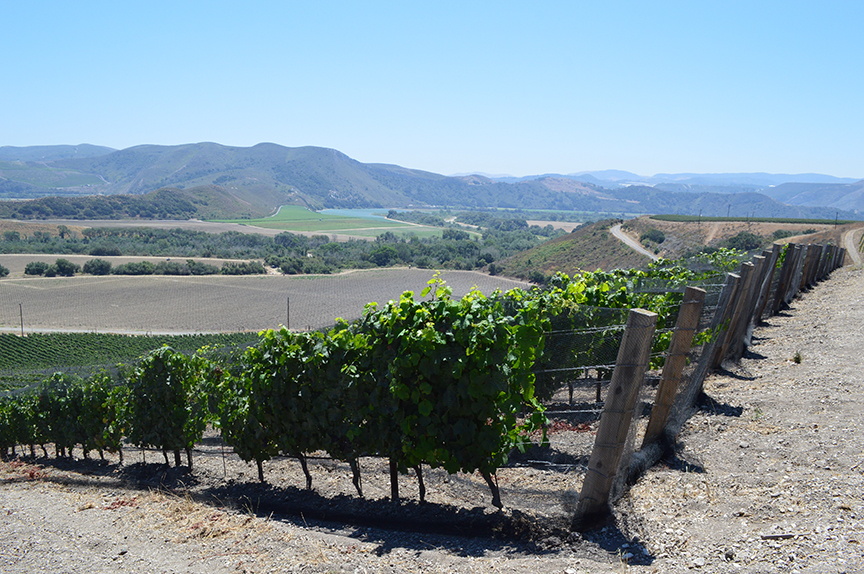 Above: The western edge of the Santa Ynez American Viticultural Area. The Pacific coast lies just a stone’s throw away.

Perceptions of gastronomy’s cultural value have changed radically since the Slow Food international movement was founded in the late 1980s in Piedmont, Italy as a champion of traditional foodways threatened by Italy’s growing appetite for fast-food. As a wide-eyed undergraduate student in Italy on my junior year abroad in 1987, I was keenly aware of the controversy sparked by the newly opened McDonald’s at the foot of Rome’s Spanish Steps. It was that year that I first heard the name Carlo Petrini, the essayist and political activist who had founded Slow Food the previous year. In 1989 he would publish the Slow Food Manifesto, a battle cry for an emerging generation of Europeans who saw their culinary traditions being eclipsed by the march of industrialism and the growing popularity of Coca Cola and assembly-line pseudo-sustenance.

“Speed became our shackles,” he wrote. “We fell prey to the same virus: ‘The fast life’ that fractures our customs and assails us even in our own homes, forcing us to ingest ‘fast-food’… In the name of productivity, the ‘fast life’ has changed our lifestyle and now threatens our environment and our land (and city) scapes [sic]. Slow Food is the alternative, the avant-garde’s riposte.

Borrowing from the fencer’s lexicon (with his “riposte,” the sport’s return thrust, made after parrying a lunge), he underlined the urgency of his cause and mission.

Back in the U.S., we were still naively parsing the differences between “northern” and “southern” styles of cooking that still passed for “Italian” here. The dark age of our culinary awareness would soon come to an end. But many years would pass before Slow Food would have a perceptible impact on the lives and meals of Americans.

It wasn’t until 2002, when local and organic food champion Alice Waters became the vice president of Slow Food International, that the movement and its local-chapter “presidia” became firmly established here and were genuinely embraced by America’s mainstream.

But Slow Food’s latent influence had already touched many of our lives by that time. In the decades that followed the manifesto, Slow Food had became a major commercial publisher in Italy. And its advocacy for local foodways gave visibility and voice to myriad small-scale artisanal food producers who would have gone otherwise unnoticed by an American bourgeoisie in search of the Tuscan sun.

By the late 2000s, with the growing interest in artisanal wine production, it was only natural that Slow Food would expand its scope to include wine. The 2010 publication of the first Slow Wine Guide was a watershed for Italian wine lovers on both sides of the Atlantic. And it marked a bold departure from the cultural hegemony of score-based and tasting-note-driven wine reviews. As the editor-in-chief of our new Slow Wine Guide to the Wines of California and the Italian Slow Wine Guide Giancarlo Gariglio noted in a previous post, it was the first vade-mecum to abandon the baroque tasting note paradigm and focus on the grape-farmers and winemakers themselves.

This week, with the online publication of the Slow Wine prizes, I share Giancarlo’s vision that the Slow Wine model will help to raise awareness of California wineries whose values align with the Slow Food movement: Respect for the environment combined with a will to produce wines that express the places, people, and history of the land where they are grown, raised, and bottled.

The arc of the Slow Food movement has undeniably shaped my own gastronomic adolescence. From a 19-year-old U.C.L.A. undergrad on his first year abroad in 1987 to a father of two who’s well into his midlife… there’s no doubt in my mind that a Slow Wine Guide to the Wines of California is long overdue.