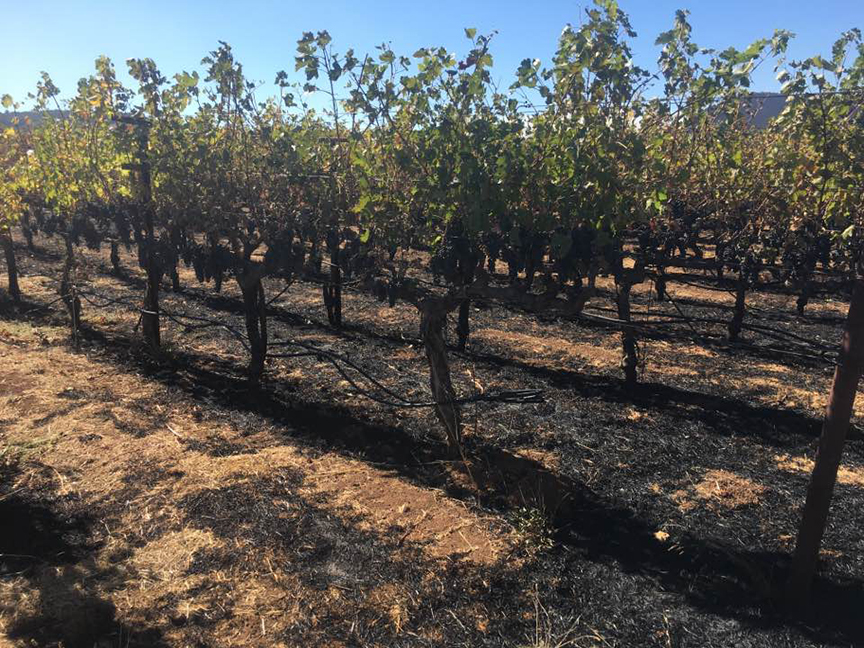 “Sad day for our vines,” wrote Robert Mondavi, Jr. on his Facebook on Monday of this week. “Our Organic Atlas Peak vineyard had 95 percent burn through. Why? We don’t use herbicides, we mow. So the 4″ of stubble burned through everything. Some areas burned end posts and drip lines. A few spots had no burn. We tried crushing that and it released so much aroma of smoke we had to stop. 100 percent crop loss.”

According to the most recent update from the Lake Napa Unit fire fighters (Sonoma County), the California wine country fires aren’t expected to be fully contained until tomorrow.

As we follow the news aggregate at WineBusiness.com (which I highly recommend), we’ve been reading countless stories of loss like that recounted by Robert.

It’s hard to gauge the complete impact that the fires will have on the local wine community. But one thing is for certain: The wine country fires — a true human tragedy — will affect not only local growers and winemakers for years to come but it will also create ripples that will spread throughout the international wine industry as a whole.

Down in Los Angeles, where I consult on two wine lists, our vendors were unable to ship wine to us for more than a week. As banal as that may seem, it meant that we took a huge loss in sales that week. But more importantly, the sales reps lost their commission. It’s just a micro-example of the long reach of this natural disaster. But it also reveals how important the California wine industry is to the trade in general.

Think of the sales managers and reps that won’t be receiving their allocations of high-end California wines across the U.S. They will lose sales, placements, and commissions (and maybe even their jobs) because they were unable to fulfill orders at their accounts.

Think of all the displaced winery and vineyard workers that will have to relocate because of the housing shortage in wine country. Who will replant fire-affected vineyards like Robert’s? Who will prune them next year? Who will pick them?

There is talk in the industry that the domino effect will create long-lasting and far-reaching problems on all levels: From the COOs of major distributors who will have to lay off employees to migrant vineyard workers who won’t find work next year.

Most winemakers we follow are recommending the Napa Valley Community Disaster Relief Fund as the best place to donate.

And here is a list of other relief effort resources.